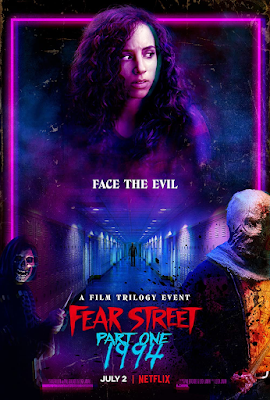 A Netflix Original Film
"A circle of teenage friends accidentally encounter the ancient evil responsible for a series of brutal murders that have plagued their town for over 300 years. Welcome to Shadyside."
~IMDB's description
Directed by Leigh Janiak
Written by R.L. Stine, Kyle Killen, & Phil Graziadei
Starring: Kiana Madeira, Olivia Scott Welch, Benjamin Flores Jr, etc...
My Thoughts: I was very excited when I saw the Fear Street movie trilogy pop up while browsing on Netflix. I had no idea that R.L. Stine's books were being turned into movies. As weird as this may sound, the Fear Street books hold a special place in my heart. Why? Let me explain.
English was my second language. I struggled in school to learn how to read for many years. I was in EL and intensive support groups. I was not able to read a book in English (or Spanish) independently and it pained me as a child. I really wanted to know how to read. I was fascinated by books and I cherished them even though I couldn't read them. Then one day when I was eleven years old, I picked up One Evil Summer by R.L. Stine at a garage sale for a quarter. I immediately took the book home and opened it. And guess what? I read that book all by myself in one sitting! From that day, I was hooked on the Fear Street books! 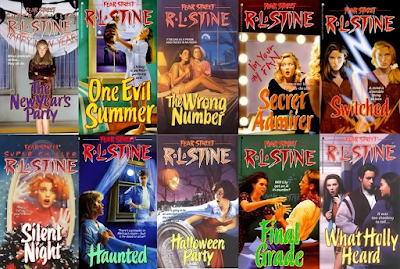 So yes, I was very excited to see the movie, Fear Street: Part One- 1994. It brought back so many memories of my childhood. And did I like it? Ugh...yes and no. I am not sure if I had such high expectations or if I remembered the book series differently, but I was not expecting what I saw.

Pros: I highly enjoyed the movie's references to other horror films as well as to R.L. Stine's books. I got a Scream vibe to it with the beginning and one of the villains being in a skeleton type costume. Then there was the villain with the ax. He reminded me of the bad guy from The Texas Chainsaw Massacre. But I mostly enjoyed the movie's nods to the books. The movie does not focus on one R.L. Stine book in particular but instead you get snippets of the books, such as The Wrong Number. Lastly, I liked the inclusivity it had. We had POC and LGBT+ characters.

Cons: Watching this made me remember that I am NOT a fan of slasher films. I don't remember the books being as bloody and graphic as the movie was. Or maybe I had a higher tolerance when I was younger? Don't get me wrong; it was fast paced and suspenseful. It was well done, but it's not my genre. There were too many prolonged stabbings and a bread cutter...aye, the bread cutter. I heard that the other two movies are bloodier with more gnarly kill scenes. And I am so okay with not watching the rest of the movie series.

So there you have it. These were my thoughts on the one film based on the Fear Street books. Thanks for reading!