Review: The Viscount Who Loved Me 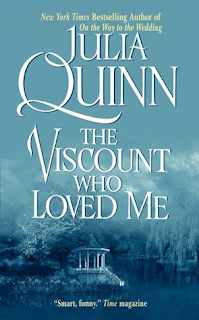 1814 promises to be another eventful season, but not, this author believes, for Anthony Bridgerton, London's most elusive bachelor, who has shown no indication that he plans to marry.

And in truth, why should he? When it comes to playing the consummate rake, nobody does it better...

Contrary to popular belief, Kate is quite sure that reformed rakes do not make the best husbands—and Anthony Bridgerton is the most wicked rogue of them all. Kate is determined to protect her sister—but she fears her own heart is vulnerable. And when Anthony's lips touch hers, she's suddenly afraid she might not be able to resist the reprehensible rake herself.

My Thoughts:  I am continuing the Bridgeton series especially when season two has been picked up by Netflix. Yes, I've had the whole book collection dusting away on my shelves for many years but I am glad to finally get to them. Better late than never, right? This book focused on the oldest brother, Anthony. I liked him in the first book and I was looking forward to reading his story. And boy, I had fun with this one!

I'm a sucker for enemies to lovers type of stories and this second book had exactly that. Anthony and Kate did not like each other very much. Kate did not like Anthony because he was a rake and she wanted to protect her younger sister while Anthony did not like Kate because she did not fall into his charms and was getting in the way of his conquest. I couldn't help but giggle at all the things that were said between Anthony and Kate and the situations they got themselves into. What I really enjoyed was reading how they couldn't keep away from each other and how they eventually fall in love.

I liked Anthony and Kate a lot more than I did the main couple from the first book. Kate was a good older sister who tried her best to protect her younger sister. As the oldest in my family, I highly related to Kate (and Anthony) when it came to taking up the responsibility of the oldest sibling. I also admired Kate's responses from suitors. Along with her younger sister, Kate was also looking for a match but was not having much luck when her younger sister was blessed with all the good looks. There was no jealousy bone in Kate but she was still vulnerable, which made her more real to me. Now Anthony... Anthony was a jerk and I wanted to smack him a few times. However, I could not help but like him. He was a good older brother who tried his best to be the father figure for his siblings. He too had some demons in him that made him vulnerable to love. Luckily, he came to his senses towards the end.

Overall, I enjoyed this book way more than the first book. I had fun reading the process of Anthony and Kate falling in love. I am looking forward to continuing to read the rest of the series. I rate this: