By Paola Mendoza and Abby Sher 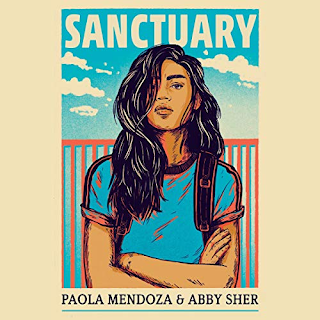 It's 2032, and in this near-future America, all citizens are chipped and everyone is tracked - from buses to grocery stores. It's almost impossible to survive as an undocumented immigrant, but that's exactly what 16-year-old Vali is doing.

She and her family have carved out a stable, happy life in small-town Vermont, but when Vali's mother's counterfeit chip starts malfunctioning and the Deportation Forces raid their town, they are forced to flee. Now on the run, Vali and her family are desperately trying to make it to her Tía Luna's in California, a sanctuary state that is currently being walled off from the rest of the country.

But when Vali's mother is detained before their journey even really begins, Vali must carry on with her younger brother across the country to make it to safety before it's too late.

Gripping and urgent, coauthors Paola Mendoza and Abby Sher have crafted a narrative that is as haunting as it is hopeful in envisioning a future where everyone can find sanctuary.

My Thoughts: I started listening to this book without really reading the synopsis of it. I knew this book focused on immigration but I did not realize what genre it was. So I was a little stunned at the beginning with the details regarding the border wall along California and Mexico. The event was horrendous that I had to research to see if this was true; that's when I realized that this book was actually a dystopian book.  I was relieved to find out that this was fantasy but I knew this was going to be a great book based on my reactions from the start.

The story was set in the near future, 2032, where the US president has made fear against immigrants the forefront of American issues. In this future, it was implied that the president has become more of a dictator for he has been in office for more than two terms. Every US citizen was required to have an identity chip implanted into their wrists and be scanned daily to determine their national status.  In order to survive and not get caught, this meant that illegal immigrants implanted illegal chips into their wrists. The president relied on sending false information and spread lies to increase the fear and hatred towards immigrants. This lead not only hatred towards a specific group of people, but made white Americans suspect any person of color or any person with an accent.

Val and her parents were illegal immigrants. A year prior to the story's timeline, Val's father was captured and deported back to Colombia. Once arriving to his home country, Val's father was savagely murdered. Val and her mother remained behind in the United States, in Vermont, trying to live the best lives as they could without getting caught. But when the president upped the frequency of scans and the technology of the chips advanced, Val and her family have no choice but to run away to California.

I highly admired Val. She was an incredibly strong young woman who did everything possible to survive and protect her little brother, especially after their mother was captured. Though Val's little brother was legal, he had no other family other than Val. The journey Val and her little brother took was strenuous and absolutely terrifying. Their struggles were so realistic that I could not help but fall in love with them. My heart kept racing as I feared for their safety, I exclaimed joyously when they would escape, and I fought many tears as I listened to their pain.

Though this was a fictional story with very fake events, many of the things described were too realistic. The description of the president was too similar to the one we had in the previous administration. The lies and mistreatment of immigrants were too close to the real thing. By listening to how gaslighting, fear, hate, and deception can lead to the future described in this book was absolutely appalling and frightening!

I don't want to say too much without spoiling the book but I do have to say, read it! Yes, it dealt with a very tough topic but stories like this, even fictional, need to be heard. There needs to be more empathy in this world.  I rate this book: