Audiobook: We Are Not From Here 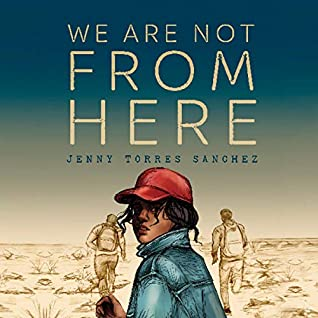 A ripped-from-the-headlines novel of desperation, escape, and survival across the U.S.-Mexico border.

Pulga, Chico, and Pequeña have no false illusions about the town they've grown up in and the dangers that surround them. Though their families--both biological and found--create a warm community for them, threats lurk around every corner. And when those threats become all too real, the three teens know they have no choice but to run: for the border, for the hope of freedom, and for their very lives.

Crossing from Guatemala through Mexico with their eyes on the U.S. border, they follow the route of La Bestia, a system of trains that promise the hope of freedom--if they are lucky enough to survive the harrowing journey. With nothing but the bags on their backs and the desperation that courses through their very veins, Pulga, Chico, and Pequeña know that there's no turning back, dangerous though the road ahead might be.

In this story inspired by real--and current--events, the plight at our southern border is brought to life.

My Thoughts:  Sometimes it's not an easy choice reading these types of books for me. Stories about people trying to get to the United States to have better lives are usually heart wrenching. As tough as it is to read about these tales, I feel that it's important for these stories to be heard.  We Are Not From Here kept popping up in my social media so I took it as a sign to read it. This was a great book, despite it making me do an ugly cry towards the end.

This was the story of Pulga, Chico, and Pequeña as they tried to survive in their hometown in Guatemala but had no choice but to leave it.  Violence was a daily thing they had to live with in their town. They had to constantly watch their backs to make sure they were not getting themselves into situations that would end their lives or that of their families'. Learning about the death of a loved one or a friend due to violence was a weekly thing for Pulga, Chico, and Pequeña. Young men had to fear about getting killed or being forced into a gang while women feared of being killed and/or being raped.

As careful as they tried to be, the protagonists were not able to escape the monstrosities of their hometown. Pulga and Chico witnessed a murder and were being forced to become murderers themselves in order to keep them quiet.  Pequeña's beauty caught the attention of the leader of a gang who ended up forcing her to have his baby. Listening about the characters' challenges, knowing how young they were, and hearing how they fled their town to try to make it to the United States was terrifying. I kept praying for them to make it to the US safely knowing that many hardships were unavoidable for them. And boy...when I got to the scene with the train... I was in shock and absolutely devastated.  I felt so many emotions while listening to this book that I found myself laying in my bed for a while after finishing it.

The narrator for this book did a pretty decent job. She had great pacing, transitioned between English and Spanish smoothly, and was able to put the right amount of emphasis to certain events. My only complaint was that sometimes it was hard to differentiate between the characters because the narrator did not change her tone of voice.  However, once I got used to the narrator's style of reading I really enjoyed listening to this book.

Overall, this was a really good book. It was not easy to listen to it but I am glad I did. I rate this book: