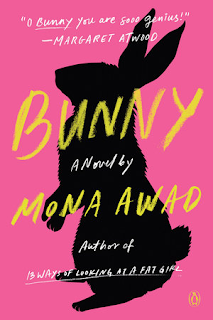 Samantha Heather Mackey couldn't be more of an outsider in her small, highly selective MFA program at New England's Warren University. A scholarship student who prefers the company of her dark imagination to that of most people, she is utterly repelled by the rest of her fiction writing cohort--a clique of unbearably twee rich girls who call each other "Bunny," and are often found entangled in a group hug so tight they become one.

But everything changes when Samantha receives an invitation to the Bunnies' fabled "Smut Salon," and finds herself inexplicably drawn to their front door--ditching her only friend, Ava, a caustic art school dropout, in the process. As Samantha plunges deeper and deeper into the sinister yet saccharine world of the Bunny cult and starts to take part in their ritualistic off-campus "Workshop" where they magically conjure their monstrous creations, the edges of reality begin to blur, and her friendships with Ava and the Bunnies are brought into deadly collision.

A spellbinding, down-the-rabbit-hole tale of loneliness and belonging, creativity and agency, and friendship and desire, Bunny is a dazzlingly original second book.

This book took me way longer than expected to read and I spent many days trying to figure out how I felt about it. Did I like? Did I fully understand the book? One thing I am sure of is, it is just freaking weird!!!

We have Samantha, who appeared to be a reliable main character at first glance until she got sucked into the world of the Bunnies. Samantha attended a MFA program at a high end school. She was awkward with a troubled past and had a best friend who was always in black. But Samantha could not help herself but be attracted to a group of pristine dressed women in her cohort. This group of women called themselves Bunnies and were creepily too closed to each other.

It was fascinating to hear how Samantha described each Bunny. The Bunnies reminded me of the girls in the Heathers and Mean Girls. The group of women were in pink, they were stuck up, they were overly nice to each other but backstabbing, and there was the meanest girl who was the leader. What set them aside from the movies were their "workshops." These workshops were gatherings of them creating writing pieces or projects that could fulfill their sexual fantasies. These workshops were absolutely disturbing, intriguing, and absolutely confusing. It made me constantly question Samantha's reliability as a narrator. Was she mentally unstable? Was she being imaginative? Or was this part of her writing process? And when all of the hacking of the creations began to happen, I was even more disturbed. The weird thing about it though was, I could not stop reading it!

I enjoyed the book yet at the same time hated it. There was rumor that it was going to be turned into a TV series on AMC. I am not much into gory films but I would be interested to watch it just so it could help me understand the book better. I never felt so confused and constantly asked myself, "WTF did I just read?" after reading a book. I rate it: