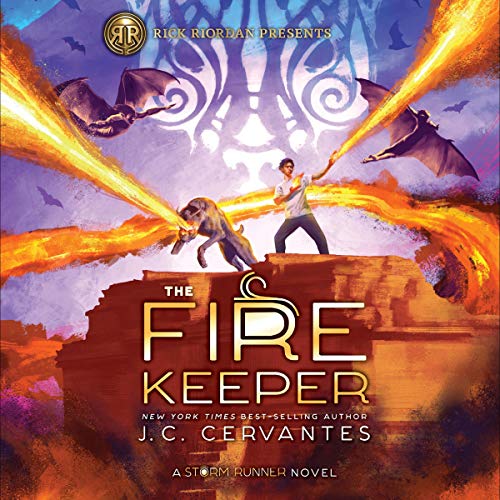 Zane Obispo's new life on a beautiful secluded tropical island, complete with his family and closest friends, should be perfect. But he can't control his newfound fire skills yet (inherited from his father, the Maya god Hurakan); there's a painful rift between him and his dog ever since she became a hell hound; and he doesn't know what to do with his feelings for Brooks. One day he discovers that by writing the book about his misadventures with the Mayan gods, he unintentionally put other godborn children at risk. Unless Zane can find the godborns before the gods do, they will be killed. To make matters worse, Zane learns that Hurakan is scheduled to be executed. Zane knows he must rescue him, no matter the cost. Can he accomplish both tasks without the gods detecting him, or will he end up a permanent resident of the underworld?

In this cleverly plotted sequel to The Storm Runner, the gang is back together again with spirited new characters, sneaky gods, Aztec royalty, unlikely alliances, and secrets darker than Zane could ever have imagined. Secrets that will change him forever.

My thoughts: I had so much fun listening to the first book in this trilogy that I knew I had to read the second one! I was not expecting the first book to end the way it did, so I could not wait to continue Zane's adventure. Though this one was not as great as the first book, The Storm Runner was still a thrilling read.
To say that this book was action packed was an understatement. After Zane and his gang left the island, I felt like every single page was bombarded with non-stop events. I thought it was cool how a lot of it took place in the Underworld, but after a while of constant things happening, I became dull. For a while I felt as if I was in a dream where you are walking down a hallway that never ends. Every time I returned to the book, I felt that Zane was always talking to the goddess of death and planning how to save his father. For being action packed, it sure felt like nothing new was happening.
However, once Zane met up with other godborns, things got really exciting. I was not too shocked to learn who were the real bad guys in this book, but I absolutely enjoyed that the story began to move to its conclusion.  In fact, the ending made me look forward to the next book in the series.
In the end, I did have fun listening to this book. It was not as great as the first book but it was still entertaining. I even enjoyed listening to the narrator more in this one than in the first book. I rate it: