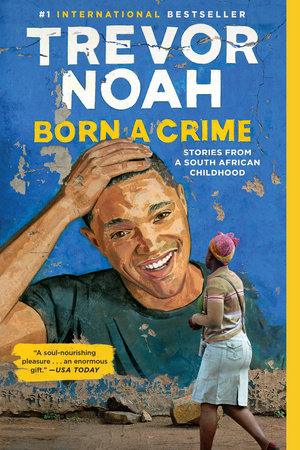 Stories from a South African Childhood

The memoir of one man’s coming-of-age, set during the twilight of apartheid and the tumultuous days of freedom that followed.

Trevor Noah’s unlikely path from apartheid South Africa to the desk of The Daily Show began with a criminal act: his birth. Trevor was born to a white Swiss father and a black Xhosa mother at a time when such a union was punishable by five years in prison. Living proof of his parents’ indiscretion, Trevor was kept mostly indoors for the earliest years of his life, bound by the extreme and often absurd measures his mother took to hide him from a government that could, at any moment, steal him away. Finally liberated by the end of South Africa’s tyrannical white rule, Trevor and his mother set forth on a grand adventure, living openly and freely and embracing the opportunities won by a centuries-long struggle.

Born a Crime is the story of a mischievous young boy who grows into a restless young man as he struggles to find himself in a world where he was never supposed to exist. It is also the story of that young man’s relationship with his fearless, rebellious, and fervently religious mother—his teammate, a woman determined to save her son from the cycle of poverty, violence, and abuse that would ultimately threaten her own life.

My thoughts:  I absolutely loved this book!  I never really watched the Daily Show on TV but whenever I did encounter Trevor Noah's videos on YouTube or in the news, I immediately watched them. I enjoy his commentary and his humor, so I was happy to see this in his memoir. It was a wonderful read!

Trevor Noah brought up so many issues in his memoir. The biggest one that he talked about was apartheid. I never realized how bad the situation was in South Africa. I never really thought about segregation to be something still relevant there. It was troubling to learn how people were separated into groups: white, black, or colored. And of course, the white people had more privileges despite them living in Africa.  I was also baffled to learn the meaning of the title of the book: Trevor was the result of a relationship between a black woman and a white man, which was against the law. Trevor had to meet his biological father in secret and he was not allowed to call him father in public. Trevor's existence was a crime.

Another topic that Trevor talked about was the education of Afrikaans. He stressed how it was ironic that white people enforced some of their whitewash of history on Afrikaans but didn't really invest in having them understand the white culture. White people would then become outraged towards Afrikaans's "ignorance" to their culture, which was absurd. For instance, Trevor mentioned that Afrikaans tend to name their children and pets after big figures in white history, such as Hitler. Yup. Hitler. I thought this was weird at first, but as I read more, I found myself being educated and quite entertained.

As a whole, I loved this book! I need to have my own copy. I could see myself re-reading it many times and I can see myself continuing to raise its topics in future conversations with others. I highly recommend this memoir. I rate it: