Graphic Novel Review: The One Hundred Nights of Hero 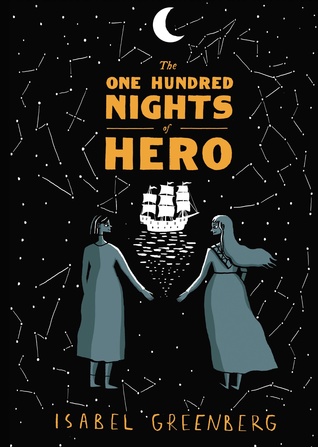 In the tradition of The Arabian Nights, a beautifully illustrated tapestry of folk tales and myths about the secret legacy of female storytellers in an imagined medieval world.

In the Empire of Migdal Bavel, Cherry is married to Jerome, a wicked man who makes a diabolical wager with his friend Manfred: if Manfred can seduce Cherry in one hundred nights, he can have his castle--and Cherry.

But what Jerome doesn't know is that Cherry is in love with her maid Hero. The two women hatch a plan: Hero, a member of the League of Secret Story Tellers, will distract Manfred by regaling him with a mesmerizing tale each night for 100 nights, keeping him at bay. Those tales are beautifully depicted here, touching on themes of love and betrayal and loyalty and madness.

As intricate and richly imagined as the works of Chris Ware, and leavened with a dry wit that rivals Kate Beaton's in Hark! A Vagrant, Isabel Greenberg's One Hundred Nights of Hero will capture readers' hearts and minds, taking them through a magical medieval world.

My Thoughts: A graphic novel told in the style of Arabian Nights? Sign me up! This idea made me eager to read it. Though I have to admit, I was not too impressed when I started to read it and for a moment there I thought that I was not liking it. In the end, though, I found myself thinking otherwise.
The graphic novel began with setting up the bizarre universe before delving into the main story. In this world, God was Birdman and his daughter created humans. Birdman's thirst to be feared and worshiped created the darkness in the world. After the prologue, the reader was introduced to the two heroines, Cherry and Hero. Cherry's innocence was at stake and it was Hero's job to make sure the evil Manfred did not touch Cherry for 100 nights. Hero told stories that made Manfred forget his mission. The stories were feminist retellings of fairy tales and folktales. They focused on sisterhood, women empowerment, and keeping women's stories alive.
As I mentioned before, I was not too impressed at the start. I thought the world of Birdman was a little weird and I did not like how the majority of the men were portrayed. Also, the illustrations were not the neatest and the style choice for the text made it difficult to read at times. However, I found myself enjoying Hero's stories and found myself pensive at the messages at the end of each one. I felt warmth in my heart when concluding the book.
So overall, this graphic novel does hold promise despite some set-backs. It has great retellings with awesome messages. I rate it: