As any true fanged fan knows, vampires are always in season. Enter to win four paranormal sensations and put a splash of red into your holidays. Action, adventure, romance, and entirely new twists on the vampire genre.


One winner will receive all four e-books pictured here. Winner may substitute any of these titles for another by the same author within the same series. 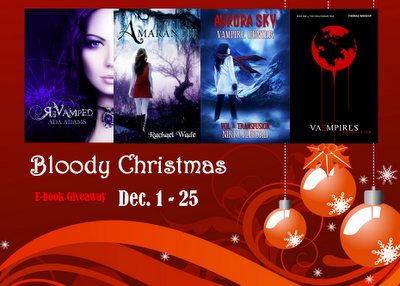 > Cheer on Team Misfits in ReVamped as they take on rogue vampires in the once peaceful little town of Angel Creek.

> Journey to hoodoo influenced Southern Louisiana – an exile for reformed vampires in Amaranth.


> Answer the call of the wild in Aurora Sky: Vampire Hunter where vampires are flocking towards the dark and cold.


> Take a trip into the future in Vaempires: Revolution where continents have collided and humans and vampires have learned to live in peace until vampires begin morphing into vaempires, superior beings whose mission is to dominate the planet.


Redefining what it means to be vampire - Stop by the authors’ sites and get to know them better - Ada, Rachael, Nikki, Tom


Wishing you a Scary Christmas!
The Rafflecopter embed code is: a Rafflecopter giveaway
Posted by Vonnie at 9:36 PM