Review: Be Still My Vampire Heart by Kerrelyn Sparks 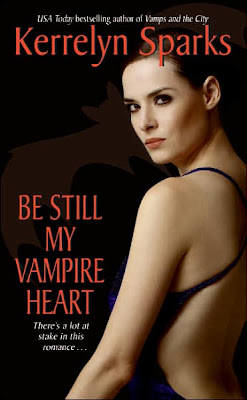 Synopsis: If it was still beating. Angus MacKay has been undead for almost five hundred years and it's not often something, or someone, surprises him. Until Emma Wallace. The sight of this luscious agent from the CIA's elite Stake-Out team was enough to stop Angus in his tracks. But then he discovers that she's a vampire slayer, intent on killing the "monsters" who killed her parents. And it's Angus's job to stop her.

The only good vampire is a dead vampire. It's been Emma's motto since she committed her life to the destruction of these things. Now Angus MacKay wants to convince her differently.

Sure, he's a sexy Highland warrior who seems to have stepped off the cover of a romance novel, complete with brogue, kilt, and sword, but he's also one of them. And it's her job to kill him.

My thoughts: I enjoyed this book much more than the second book in the series, Vamps and the City. I was hesitant to read the third book because of how much I was thrown off by the previous book, but Kerrelyn Sparks does redeem herself in Be Still My Vampire Heart. It was cute, suspenseful, hot, and absolutely funny!

First off, this book did not have instant love like the second book, which was a huge plus for me. The main characters Emma and Angus actually met, there was immediate attraction, they "courted" each other, and after a few days of knowing each other and going through some danger they fell in love. Yes, it all happens in one week but it made perfect sense in this book, unlike the second book where the characters fall in "love" with one another within five minutes. Love was better portrayed here.

Now, let me talk about the characters. I loved Emma and Angus along with the other minor characters. Emma was strong, independent, yet yearning for love. She appeared very real to me as a modern woman, excluding the fact that she was a vampire slayer. Angus was perhaps my favorite character. Not only was he tall, muscular, had a Scottish accent and wore a kilt, but he was hilarious. The things he said had me laughing and the fact that he always had to check his "junk" to make sure it was still there after every teleportation had me giggling. Also, these two together were absolutely great! Emma and Angus had perfect chemistry. Another character that was introduced in the book was "Dr. Phang" a.k.a. Phineas, a new black vampire. He was also very funny and I can only hope that he has his own book in the series.

This book was not only funny and steamy, but it was also suspenseful. The Malcotents, the bad vampires, were out killing mortals and the good vamps were trying to stop them. Emma got herself stuck in the middle of the vamp chaos and she became a target for the Malcotents along with Angus. I wondered how Emma and Angus were going to escape after they got captured and were imprisoned in a cell with the only source of food for Angus was Emma. Yeah...this part had me turning the pages!

In all, I really enjoyed this book. It has me looking forward to the rest of the series, or at least the books I haven't read yet (I skipped around). I liked how it was sexy, thrilling, and humorous. I give it: