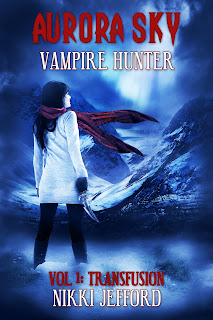 Title: Aurora Sky
Author: Nikki Jefford
Publication Date: November 27, 2012
Synopsis: If there is one thing eighteen-year-old Aurora Sky wants, it's to get off the iceberg she calls home. Being kissed before she graduates wouldn't hurt either.


Then a near-fatal car wreck changes everything. Government agents step in and save Aurora's life in exchange for her services as a vampire hunter. In Alaska. Basically she's a glorified chew toy. All thanks to her rare blood type, which sends a vampire into temporary paralysis before she has to finish the job...by hand.


Now Aurora's only friends are groupies of the undead and the only boy she can think about may very well be a vampire. And if he's a vampire, will she be forced to kill him?


My thoughts: This is my first Nikki Jefford book and it did not disappoint.  The book is filled with teenage angst, mystery, and suspense. It is a quick yet very fun read.

We meet Aurora Sky who is your typical teenager but quickly changes after her car accident. She's angry with what the government did to her and begins to rebel. I admit that there were a few times I wanted to slap some sense into her for the dumb things she was doing, especially with her New Year's list, but then I forgave her when she showed how bad ass she really is. I came to like her character because she does show some growth in the book.

At first I thought that this was another typical teen book, but it is not. There is some cussing and sexual references in the book. Yes, the main character is a teenager in high school but it does have some elements of it being adult literature. It is even recommended for audiences over the age of 18.

Now, the book takes an interesting twist on vampirism. Vampirism is a disease that is spread amongst people who have the blood type AB negative. Those who survive the disease become vampires. In order to fight these vampires, the government has injected AB negative people with the same disease but also with an antidote to create super humans to hunt vampires. I really appreciated reading this take on vampires and I only hope that more of it is explained with the other books.

Overall, I enjoyed reading this book. I wish it were longer and that there was more character development and more explanation on the vampire disease. So, I'll be looking forward to the next books in the series and hopefully some of my questions will be answered in them. I give it: 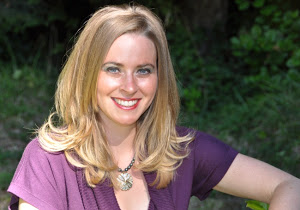 Nikki Jefford is a third generation Alaskan with a degree in journalism from the University of Alaska Anchorage. She loves fantasy, magic, fictional bad boys, and heroines who kick butt.

Nikki married Sébastien, the love of her life, while working as a teaching assistant at a high school in France during the 1999/2000 school year. They now reside in the not-so-tropical San Juan Islands, 70 miles northeast of Forks, Washington in a town without a single traffic light.
You can win an e-book of Aurora Sky and three other books in a very special Christmas giveaway!