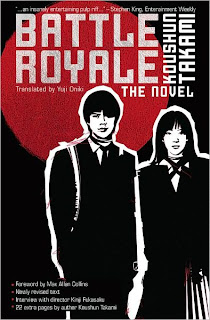 Synopsis: Koushun Takami's notorious high-octane thriller is based on an irresistible premise: a class of junior high school students is taken to a deserted island where, as part of a ruthless authoritarian program, they are provided arms and forced to kill one another until only one survivor is left standing. If they break the rules a special collar blows their heads off. Koushun Takami's brutal, high-octane thriller is told in breathless. Criticized as violent exploitation when first published in Japan--where it then proceeded to become a runaway bestseller--Battle Royale is a Lord of the Flies for the 21st century, a potent allegory of what it means to be young and (barely) alive in a dog-eat-dog world.

My thoughts: Wow! This book completely blew my mind. I was told to read this many years ago but I delayed on it because on how violent it was. After reading and loving The Hunger Games, I had no choice but to read the original work. Battle Royale is a fast paced, action packed, and very bloody book.

The plot was a scary thought to me. What if you were on your way to a field trip with your class but then find out that you and your class were selected for the yearly games? How about, your class is not the only ones that go through the games each year? This had me shocked. The thought that there's no warning that you were selected to fight to the death (unlike the Hunger Games) and the idea that there's 42 students in your class was very frightening. Also, 50 other classes were selected around the Republic of Greater East Asia each year, which means about 2000 students die annualy in the games. That's a huge number!

This book concentrated on Class B, which had 42 students. The story followed each student in the third person but we still got to see each student's point-of-view. It was a little bit confusing at first with the constant shift of characters and how similar the characters' names were, but you get the hang of it after a few chapters. The main characters were Shuya and Noriko. Shuya is a popular boy whom many girls have crushes on while Noriko was a quiet girl who was highly respected in her class. These two become partners in the games and try to find a way to escape it alive.

This book is violent and graphic, yet it was entertaining and had me gripping the pages. I had to set the book down a few times to either give myself a break from the violence and/or let the scenes fully sink in. I wanted to know what would happen next that I would immediately go back to reading it. So yes, I really liked it. I give it:

Like I mentioned before on my thoughts of the book, Battle Royale is very violent. I did hesitate to watch the movie but then I noticed that Youtube had it and I figured that I should try it. Yes, the movie is violent as well but everything is exaggerated that it could be tolerable.
The main idea of the story pretty much stayed the same but there were many changes. For one, the students did not have a clue what Battle Royale was while in the book they new all the details of it. Also, the teacher in the movie was made more personal versus the book. The teacher from the movie was someone the students knew. Furthermore, the way some of the deaths occured where changed and everything happened so fast that there was not much time to connect with any of the characters. The ending was different as well and it was comical to me.
If I didn't read the book first, I probably would not have appreciated the movie for what it was. Everything was done to the extreme that it was easy not to feel shocked like in the book. It was a decent film, but not my favorite. I would give it 3 stars.
﻿
Posted by Vonnie at 3:17 PM